Of course the apparent suicide of Robin Williams punched me in the gut, like it did so many of us. Honestly, if it had happened 25 years ago, I probably wouldn’t have been all that surprised. Saddened, but not surprised. I figured if he’d gotten this far, he’d get through the whole thing. His whole life, that is. I wanted to believe that in the face of my own depression, that someday it would get better, or easier. That once I’m in my 50s, 60s, 70s, 80s, perhaps that voice would stop. If you’ve battled depression, you know the voice I mean. The voice that repeats over and over and says, “End it.” As a total body advocate, I believe strongly in your body, your choice. You want to off yourself, it’s your right. But there’s a moral conundrum there too, because it’s not just you that is affected. Everyone around you is hurt. Some may be irreparably damaged.

Today I listened to this podcast http://trbq.org/stay/. In it, Dean Olsher interviews Jennifer Michael Hecht about her book, Stay: A History of Suicide and the Philosophies Against It. She also reads her poem, No Hemlock Rock (don’t kill yourself). When she gets to the part where she thanks you (yes, YOU) for staying, I pretty much lost my shit. I was weeping this choked, soundless weeping. My face was completely soaked, as if my every pore were leaking tears. The cat I’m currently sitting, Buster, curled up next to me in a strange act of comfort. After I listened to the whole 12 minute podcast (listen to it!) I got up and started down the stairs and my legs buckled under me. I could barely walk, I was so shaken up.  Once again, I found myself examining my own personal moral conundrum.

Do I have the right to kill myself?

As a teenager, I was already so jaded, so bitter and so cynical about the world and how much it hurt to live in it, that there were two things I was certain of: I would never have a loving relationship with a man, and I would die by my own hand. I just sort of knew that I wouldn’t be able to cut the mustard and that sooner or later I would have to end it all, because it would simply be too much to go on. I had very neutral feelings about it, really. I just knew that’s how I would go.

Then, when I was 19, a man I knew named Edward Reffel who was my roommate, my friend (when we weren’t in some hideous manic-depressive drug-induced argument), and the owner of the black-box theatre where I was popping my non-linear, experimental theatre cherry in Busch and Durang productions, suddenly died. Sure, he’d made numerous threats about taking his own life (after every bad break-up with every girl who dumped him for being abusive), but he’d already earned a reputation as a boy who cried wolf.  This time, however there was a wolf. He was found backstage, hanging over the bathroom door, dead from asphyxiation. The noose around his neck was a prop from the current production, Phantom of the Melodrama, in which he played the phantom.

Everything was a whirlwind after that, news cameras showing up to get the scoop on the dramatic death-by-suicide of a local theatre owner. The production of Phantom of the Melodrama (now starring Eddie’s understudy) performed to packed, standing-room-only houses and mourners lined up to say their maudlin piece at our Monday open mic night, called Ed’s Poet Society (and later referred to as Dead Ed’s Poet Society). It makes me cringe now when I remember it.

When I attended his funeral, it was surreal. It was like a celebrity had died. There were so many goddamn people. And when I saw his mother, and heard the horrible wails she made as her only son was lowered into the ground, I knew one thing for certain: I would never kill myself just because life sucks. Terminal illness, hell yeah, I’m outta here. And fuck off if you don’t approve. But life sucks? It’s hard? It hurts? Filled with despair? Can’t go on? Too bad. Go on. Take another step. And another. Until you get to the end. Because that sound, that wail of grief, that wall of hurt and confused people wondering why a handsome, talented, hilarious man of only 28 would off himself, that just wasn’t the kind of thing I was willing to be responsible for anymore. I was faced with a harsh reality in the face of Eddie’s suicide: I would have to live. I would have to stick it out. I would have to stay. I thank Eddie all the time for showing me how to stay. It is horribly sad that he showed me by leaving so suddenly and violently.

I have made a point of avoiding reading articles with headlines about Robin Williams’ suicide that I knew would likely have trolls and people lacking understanding and compassion calling him selfish or cowardly in the comments. I simply cannot abide that outlook. The thing that should be understood about depression is that when you are in it, you cannot always see a way out of it. Your logical brain may tell you, “this will pass,” but it may be impossible to believe. On top of that, the survivor guilt is lumped onto those of who are depressed long before we take our own lives. We are told that those who commit suicide are cowardly and selfish, so we know that is how we will be seen if we end our suffering.  We are told to think of “those we leave behind” and we learn to put them first. I have spent many of my darkest years living for other people, because in those moments I sure as hell couldn’t live for myself. I lived for my family, and I lived for my friends.

But there is something else about depression. Maybe it seems that it is braver to stay, but I think it can sometimes feel like an act of compassion to go. You see, my cruel inner voice, and I know I am not alone in this, not only says, “End it. Just finish this already. DIE,” it also says “everyone will be better off. The world will be a brighter place without you in it.” I feel like I’m at a party and everyone is laughing and having fun, and I’m just not in the mood. I’m a downer. I’m miserable. I’m morose. I’m bringing everyone down. If I just leave the party, everyone else will be free to have a good time. They won’t have to worry about fixing me, or cheering me up. They can just start the conga line and get on with the real fun.

I recently re-read Virginia Woolf’s suicide note.  You can read it here if you’re feeling morbid: http://www.smith.edu/woolf/suicidewithtranscript.php. It struck a chord with me because she talks of the great happiness that she shared with her husband, Leonard. I think non-depressed people think those of us who are depressed should be able to get by on this happiness, should be able to remember it when we are down to get through the sadness. But of course, it’s not that easy. And a big part of you knows, even though it might get better, that it’s only temporary. It will get bad, worse, horrible, and it will do that over and over and over again, for the rest of your life. And the people you love will be forced to go through it with you, or feel the guilt of abandoning you. Virginia Woolf says to her husband, “If anybody could have saved me it would have been you. Everything has gone from me but the certainty of your goodness. I can’t go on spoiling your life any longer.” She feels that she is doing him a favor by putting both of them out of her misery. And I completely understand what she’s saying. She doesn’t see it as selfish, but rather self-less.

And yet, I choose to stay. Not because I’m braver or stronger than those that don’t. My heart will always seize up and weep for those that just can’t get through this hard, hard life. I feel their pain profoundly, but I choose to stay. There are times when I choose to stay just for the day, because that’s the best I can do. Today, after crying through that podcast, my legs so weak I could barely walk, I checked the clock to see that it was 2 p.m., which meant only 10 hours left of this day.

“You can do that, right?” I asked myself. “You can stay for ten more hours. You can stay. Today. Choose it. Tomorrow you can choose again.”

I promise. I will stay today. 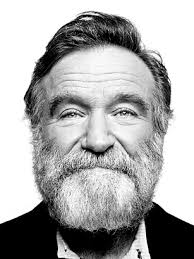 The alien, the Fisher King, member of Dead Poet’s Society